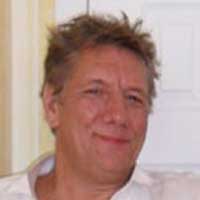 David Boulton was honorably discharged from the U.S. Navy in 1982. He performed the duties of an Electronic Technician in the Aircraft Maintenance Department at the Naval Air Station, Key West, Florida. He was awarded various commendations for his expertise and leadership skills.

David joined Sound One in 1984, a New York City post-production film and television house. He performed a variety of jobs in the film business before settling in as one of New York’s leading Automated Dialogue Replacement Engineers. David has lent his talents to hundreds of films and television shows. His clients have included Martin Scorsese, Spike Lee, Mike Nichols, the Coen Brothers, Jonathan Demme, and Frank Oz, to name a few.

He also has the distinction of enjoying a close working relationship with most of the renowned New York City actors, among them Al Pacino, Robert DeNiro, Meryl Streep, John Turturro, Susan Sarandon, and Steve Buscemi.

Since leaving Sound One, David is pleased to have joined Soundtrack New York. He is excited to be working along side Tommy Fleischman and Bobby Chefalas again. David looking forward to his association with Soundtrack.

David also produces Independent Films. In 1997 “Pishadoo”, in 2002 he followed with “Hyper”. 2007 “American Carny” True Tales From the Circus Side Show. Then in 2008 “The Wedding Bros.” David is currently working on “Don Peyote” which is in postproduction and “Gone to Texas” which is also in postproduction. David is presently in development on his next project “Dark”.

David’s work can be seen on IMDB.