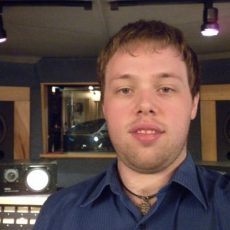 Ric is a graduate of Emerson College, studying Sound Design and Audio Post-Production. He started at Soundtrack 10 years ago as an intern while still in college and worked his way to becoming a versatile mixer and supervising sound editor.  Recent mix and sound design credits include Paul Schrader’s “Dog Eat Dog,” Sony Pictures’ “Breakable You,” and an HBO two part untitled forthcoming Elvis Presley documentary.

which he sound designed and mixed alongside Tom Fleischmann.

For several years he worked extensively in ADR and Foley, having been an ADR Mixer on films and TV shows such as Gravity, Homeland, and Boardwalk Empire, which earned him an MPSE Golden Reel Award and a Primetime Emmy Citation for, and as a Foley Mixer on The History Channel’s MiniSeries “Sons of Liberty” and USA’s “Royal Pains.”

In addition to post-production, Ric has worked extensively in the music world as a recording and mixing engineer, having had the opportunity to work on everything from classical to dubstep, including as score mixer for John Lovits’ “Almost Sharkproof.”  For the past six years he has also served as the production sound mixer for the BET Hip Hop Awards’ Cyphers, recording artists such as Kanye West, Ludacris, Eminem, and Busta Rhymes.

Ric is as versatile as they come, having worked both on and off set, as a music engineer, and as a post production mixer and sound editor.  He is a valuable asset to any Soundtrack production.

Ric’s work can be seen on IMDB.