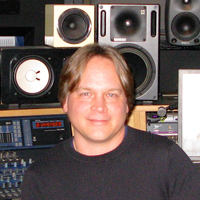 Scott joined Soundtrack in 1991 while finishing Berklee College of Music in Boston. His early days at the studio were spent recording, editing and mixing music for the Aircraft Music Library. Scott’s music mixing skills translated well to the world of commercial post production, where he was able to apply his diverse technical and personal communications skills to a side of the business that can be very stressful and mentally demanding. He quickly gained a reputation as a talented ad mixer excelling in the new world of digital audio workstations, mixing spots for world wide brands like Toyota, Ford, Sony, McDonald’s, and many more.

As the television production audio business grew at Soundtrack, he’s had the opportunity to work on many TV series doing dialog replacement, such as Law & Order, Sex and the City, King of the Hill, Gossip Girl, and many feature films as well. In 1999, Scott received a multi-platinum record for his work on the “Jock Jams” compilations from Tommy Boy Records, and the American Masters documentary “Ella Fitzgerald: Something to Live For” was nominated for a Grammy in 2000. In 2011, Scott mixed the CD ‘Chandrika: Soul Call’ which earned a Grammy nomination for Best Contemporary World Music Album.   Scott’s work can be seen on IMDB.